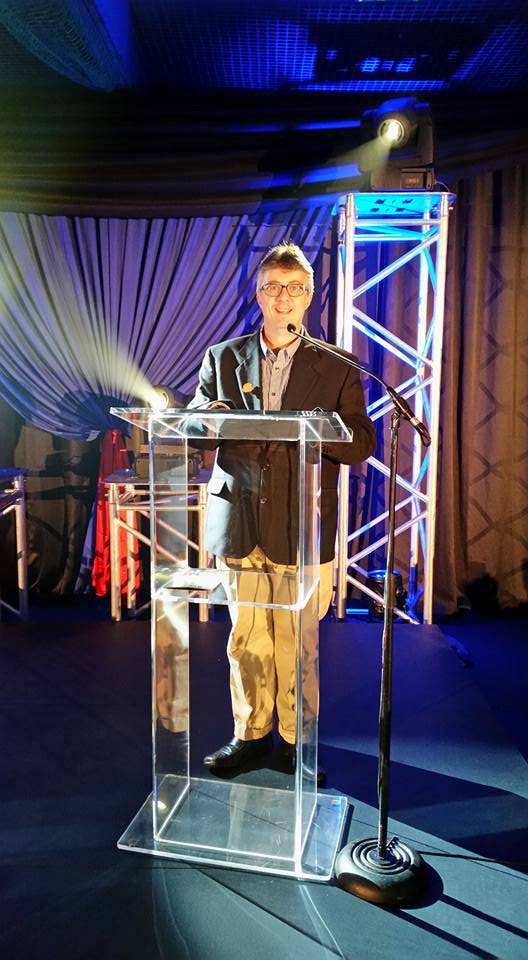 “Twelve months ago I made a deal with myself – STOP MAKING EXCUSES AND START MAKING PLANS.

At a whopping 144 kg’s at my worst point with a small 5 ft 6 inch frame, the warning signs were there and I realised that I needed to make an investment in my health.

As a father of two boys I was literally flirting with death – I was a ticking time bomb. I so wanted to see all the milestones in my children’s lives, but in reality, the likelihood was diminishing with an upsurge in health problems related to obesity.

I was forced to acknowledge that I was suffering from a lifestyle disease capable of killing more people than we tend to realise. I was determined not to become a statistic.

I had also become an expert in my own right on weight loss and dieting. There wasn’t a single diet I hadn’t tried and through every journey I simply experienced the yo-yo effect – up-down-up-down.

Enter SLENDER WONDER into my life — A medically-managed weight loss programme which treats the causes of obesity and not the symptoms.

Having been a serial dieter all my life, I had my reservations initially. The mere thought of injecting myself daily struck the fear of God into me and I had tried just about every pill, powder and potion on the market.

This is where the first point of engagement in a process is the most critical. I encountered a Slender Wonder medical professional, Dr Ninette de Klerk (Slender Wonder Clinic, Wierda Park, Centurion), who was thorough and explained the journey ahead down to every last detail.

That immediately ensured I dropped my guard, became relaxed and committed myself to making a success of this journey on which I was about to embark.

Dr De Klerk convinced me that ‘Changing the face changes nothing, but facing change, changes everything’.

I knew consciously I had made a decision to invest in life. The role of your SW medical practitioner is crucial on your journey, particularly when he/she is part of your own personal journey on an emotional and physical level.

The role your doctor also plays in equipping you emotionally for the journey is vital and to this end, I cannot thank Dr De Klerk for her unwavering support, even as my weight loss began slowing down later in the process.

It wasn’t entirely about changing my body physically, but more about revising my thought pattern and being able to convince myself that this is nothing more than a lifestyle alteration.

So, once I banished the dreaded “D” word from my vocabulary permanently, the journey became easier and easier.

I was forced to convince myself that by eating sensibly, I was not depriving my body of anything, but actually doing it a favour. Effectively, my brain became my biggest appetite suppressant.

As a senior sports journalist, much of my work involves travelling and a plethora of social engagements, functions and launches within my network.

Clearly they were not in a position to adapt to my needs on the buffet or snack table. I had to adapt my lifestyle around the Slender Wonder programme – conscious choices.

Gradually I learned to walk straight past a buffet table laden with the ‘dangerous’ foods and head straight for the healthy SW programme alternatives.

Being a regular traveller to sporting events around the country and abroad on the odd occasion, I made use of the Slender Wonder pre-packed meals to take along when I travelled and kept my injections on ice while on Simeon B.

Hotels, lodges and guest houses were also all very accommodating by providing me with cold storage options or fridges in my rooms. A short trip down to the hotel kitchen to warm up a SW meal was also common and never seen as an inconvenience for me.

If you allow it to become an inconvenience, then it WILL.

So determined was I to succeed that I even adapted my travel plans to accommodate my Slender Wonder needs and never once deviated from the programme, whether on Simeon B or Go Moderate.

As the weight continued dropping off at a decent pace, so I became more and more motivated. A simple theory – ‘If it’s not in the book, then it’s not allowed.”

I very quickly forgot what all the dangerous and comfort foods were like and conditioned my brain to start ‘liking’ the healthy alternatives – Pap vs snack bread – white bread vs Provita – In my re-conditioned brain – NO CONTEST!

Keep the focus away from the scale and rather concentrate what goes in the mouth. The scale will respond accordingly.

Even in the high stress multimedia environment in which I operate daily, I never once resorted to binge eating or stuffing my face with the traditional comfort or ‘on the run’ foods.

Never lose faith in the process, even if you record a very small loss. Initially the weight dropped off very rapidly, but has slowed down now at an advanced stage and as I edge closer towards my goal weight.

Don’t let that ever deter you or steer you off course in frustration. Also remember at all times that every person’s body will react positively, but very differently. Some patients may edge towards goal weight faster than others and patients, like myself, with large amounts to shed, will often take slightly longer.

Like in sport, I am now determined not to look back, unless there are lessons to be learned and focus on what I have accomplished. Don’t be ashamed to hail your own performance – pat yourself on the back – It’s OK.

Tip – Try not to weigh yourself during a SW weight loss cycle or between visits to your SW doctor. If you are disciplined, then the scale will tell you a story and you will leave smiling.

When the door of happiness closes, another opens, but, often at times, we look so long at the closed door that we don’t even see the new one which has been opened for us.

END_OF_DOCUMENT_TOKEN_TO_BE_REPLACED

END_OF_DOCUMENT_TOKEN_TO_BE_REPLACED
Back to our blog
View Cart Checkout Continue Shopping